Lord Shree Swaminarayan was always attracted by the divine attributes of the devotees of Kutch. After his appointment as the spiritual leader of the whole Sampraday, He visited Kutch in the month of Maha Sud 7 Samvat 1860. He spent 30 years of His total lifespan in Gujarat and visited Kutch more than 20 times (His total time spent in Kutch was 7 years). As a result of His frequent visits, a series of inspirational devotees realised that He was none other than the Supreme Purshottam Narayan Himself. Through the inspiration of Bhagwan Shree Swaminarayan, and the power of Bhuj Saints and Bhaktos from all over the world, a magnificent temple has been constructed using traditional Vedic architectural methods, on the banks of Hamirsar Lake. Since its first brick installation ceremony on 7 May 2003, it has taken 7 years for its completion. Based on a grand podium, the new temple faces East and is constructed mainly with pure high quality marble. Next door to the Aina Mahal, in the same walled compound, is the giant Prag Mahal, which may at first seem slightly out of place at the far western edge of India, looking more appropriate in France. But then again, globalization is not a new phenomenon. This is a palace commissioned by King Pragmalji in the 1860s, designed by Colonel Henry Saint Wilkins in the Italian Gothic style and built in the middle of Bhuj next to the Aina Mahal. While little about it may seem Indian, there are elements; see if you can find them. In the courtyard behind the palace, there is a small Hindu temple with very nicely carved stonework; the caretaker is sometimes available for more information. 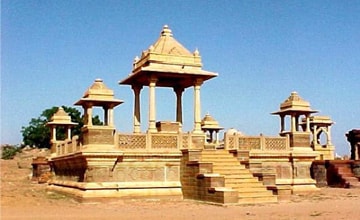 Chhatedi-is one of the historical place in Bhuj, Kutch, Gujarat known for it’s architectural excellence. Unfortunately major part of it was damaged in 2001 earthquake. One of the shot in movie “Hum Dil de Chuke Sanam�?was filmed here. 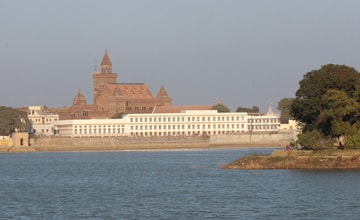 An excellent place to cool off on a hot afternoon, Hamirsar Lake is where people go to swim, or sit under a tree and enjoy the water, as well as where many women do their laundry. Walking along the lake's edge is a great way to get from one place to another, with the Aina Mahal and Praga Mahal, the Kutch Museum, the Ramkund Stepwell and Ram Dhun Temple, the Swaminarayan Temple and the Alfred High School all located very close to the eastern side of the lake; a walk from the Aina Mahal to the Swaminarayan Temple (passing all the other sites mentioned) takes about half an hour. Further around the other side of the lake is the Sharad Baug palace, and the road to the royal chhatardis. Bhujia Hill or Bhujiyo Dungar is a hill located in the outskirts of the town of Bhuj in the district of Kutch, Gujarat, Indua. The Bhujia Fort built on the hill overlooks the town